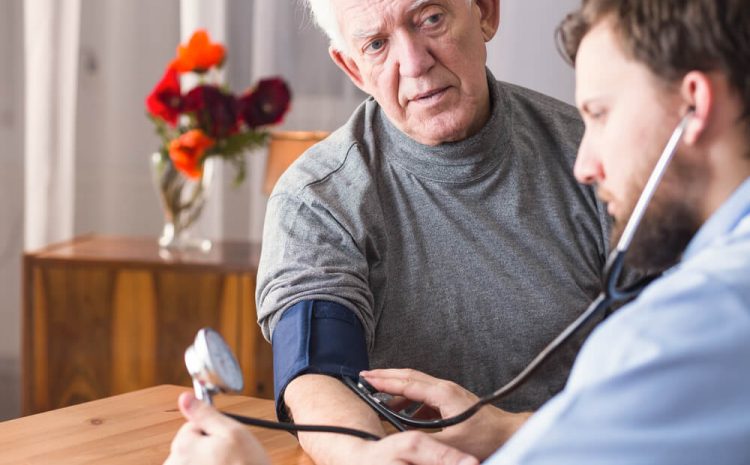 Something as simple as taking a simple medicine costing a few pennies every day could significantly reduce your risk of getting Alzheimer’s disease. Sounds intriguing, right? This is a finding from the Johns Hopkins analysis of previously accumulated data regarding dementia and high blood pressure. This data concluded that individuals who regularly take prescribed blood pressure medications were half as likely to get Alzheimer’s disease as those who don’t.

Related: How Long does it take to Recover from a Stroke

Although scientists have known that a link between Alzheimer’s and high blood pressure exists, one pressing question has been haunting them for decades; how does high blood pressure affect brain function? Several researchers have tried to find answers but are yet to reach a definitive stance. A similar study showed that older people with hypertension or high blood pressure were more likely to possess biomarkers of Alzheimer’s in their spinal fluid.

Another study found that the risk of dementia increased with higher blood pressure variation over an eight-year period. Many more findings have highlighted that high blood pressure in mid-life can significantly augment your risk of developing dementia in later life, especially vascular dementia. These findings have also concluded that a lifelong approach to good health is the most efficient way of lowering your risk of dementia.

Related: What Are The 7 Stages Of Lewy Body Dementia?

This article aims at highlighting this connection between hypertension and dementia and how high blood pressure affects brain function. Let’s get into it!

What Is Hypertension Or High Blood Pressure?

Blood pressure is a measure of the force applied to our arteries (the blood vessels that transport blood to our vital organs) by blood circulation around the body. It is typically measured by a machine called a sphygmomanometer and is reported as two numbers; systolic pressure and diastolic pressure.

There are a number of risk factors for high blood pressure, the most common of which include:

Contrary to popular belief, dementia is not a single definitive disease but an umbrella term covering a wide array of specific medical conditions. Like heart disease, a term that covers several kinds of cardiovascular disorders, dementia also includes many medical conditions caused by abnormal brain changes, such as Alzheimer’s disease.

Related: Does Parkinson’s Disease Cause Seizures?

Alzheimer’s disease alone accounts for about 60-80% of dementia cases and is often misconstrued as being one and the same. Vascular dementia comes in second place under this category and occurs because of microscopic bleeding and blood vessels blockage in the brain. Some individuals also experience brain changes of several types of dementia simultaneously, and this condition is called mixed dementia.

The disorders that are usually grouped under dementia trigger a severe decline in cognitive abilities (also known as thinking abilities) that hampers daily life activities and independent function. These diseases can also significantly impact relationships, feelings, behavior, personality, and mental state. Several factors and conditions can also cause symptoms of dementia, including some which are reversible, such as vitamin deficiencies and thyroid problems.

What are the signs and symptoms of dementia?

Dementia typically occurs with the death and loss of connection of once-healthy nerve cells, or neurons, with other nerve cells. Nerve cell death is a natural consequence of aging but occurs at a grander scale in people with dementia.

If you believe you or any of your loved ones are suffering from any of the following symptoms, it is imperative to seek immediate medical help.

The relationship between high blood pressure and dementia

Multiple studies following significant groups of people for about 15-40 years demonstrated in the World Alzheimer Report 2014 that people who had high blood pressure in their mid-life (which is typically characterized as individuals between 40-64 years of age) had a greater chance of developing vascular dementia in their later life (after 64 years of age).

Related: What Is The Difference Between Delirium And Dementia?

Despite this apparent association between high blood pressure and vascular dementia, results from the randomized controlled trials have failed to corroborate that lowering high blood pressure or stabilizing fluctuating blood pressure prevents dementia. Several pieces of research connecting an individual’s lifestyle with the risk of disease development in their later life are underway and are expected to bridge the gaps that lie between hypertension and dementia.

High blood pressure affects brain function through a number of mechanisms. It can cause a substantial strain on arteries over time, leading to several complications and causing the wall of arteries to become stiffer, thicker, and narrower. This condition is medically termed arteriosclerosis and develops due to the accumulation of fatty material in arteries.

This narrowing of arteries can also occur in the brain, which impedes blood flow and causes a lack of oxygen and essential nutrients. This, in turn, significantly damages brain cells and hampers their proper functioning. Researchers deduce that when this happens for a more extended period, the brain cells get damaged beyond repair in large amounts and begin exhibiting symptoms of dementia.

High blood pressure is also one of the most prominent risk factors for stroke. Since strokes are most commonly caused due to a blockage of the arteries in the brain (ischemic stroke) or hardening of arteries, individuals with hypertension are most likely to experience it. Another kind of stroke, called hemorrhage stroke, is caused when arteries burst in the brain and cause internal bleeding, and hypertension plays a significant role here. Both these kinds of stroke result in irreversible brain cell death that can also cause post-stroke or stroke-related dementia.

However, the gradual accumulation of such changes can impart a visible print on the brain, which can be detected through a brain scan. It is called small vessel disease and is a significant contributing factor in the occurrence of subcortical vascular dementia.

How to control blood pressure

Controlling your blood pressure is not as arduous a task as it sounds, and you can do so with slight changes in your daily life. These include:

Neuro X offers high-quality online neurological and psychiatric care right at your doorstep at the minimum cost possible. You can get online consultations from our American board-certified and fellowship-trained sub-specialists with expertise in all complicated diseases related to brain health, including but not limited to stroke, dementia, epilepsy, movement disorders, multiple sclerosis, etc.

Select a physician of your choice by viewing their detailed profile, subspecialties, and conditions treated, and hear back from them within 24-48 hours! Our doctors can also provide you with an e-prescription per your demands and electronically send it to a pharmacy of your choice. Head over to NeuroX right now to get to know more!