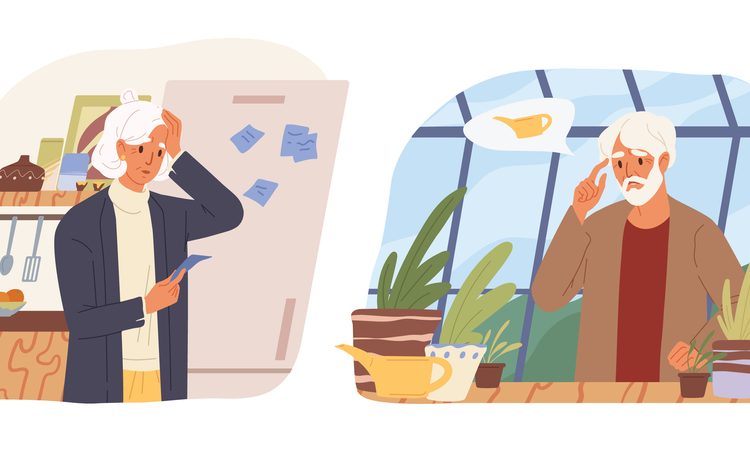 People with both conditions experience changes in the brain that cause physical, cognitive, and behavioral symptoms. They have several similarities as both are forms of dementia, but there are also clear differences between them.

Related: What Are the Treatments For Dementia?

Alzheimer’s is a progressive neurological disease that causes the brain to shrink and brain cells to die. It begins with mild memory loss and derails into loss of cognitive, behavioral, and social functions like the ability to converse and respond to your environment. It is characterized by amyloid plaques and neurofibrillary tangles in the brain. One of the key symptoms of Alzheimer’s is memory loss and other symptoms of Alzheimer’s are in the image below.

Lewy body dementia is a condition where abnormal protein deposits called alpha-synuclein are found in the brain. The deposits are called Lewy bodies and affect the brain’s chemical make-up, causing changes that lead to problems in thinking, behavior, mood, and movement. It is a progressive disease with a slow onset of symptoms that worsen over time. The development of signs and changes vary significantly from one patient to another, depending on their overall health, age, and symptoms.

The Link Between the Two Diseases

Related: Conditions That Can Cause Memory Loss

Now that we’ve established what either of the diseases is, let’s see how they differ across key categories of causes, symptoms, treatment, life expectancy, risk factors, and outlook.

It must be noted, however, that research hasn’t confirmed what exactly triggers the changes in the brain in either case.

Comparison of Common Factors between LBD and Alzheimers

The diseases can impact similar functions and aspects of the human body – but in different ways.

In LBD, memory, and symptoms can vary significantly. For example, a person may be able to recognize you on some days, and on some days, they will fail to do so.

Related: Can a Stroke Cause Vascular Parkinsonism

In Alzheimer’s, however, while cognition can vary to some extent, the person’s cognition – his/her ability to think and use their memory – experiences a gradual decline over time. Unlike LBD, the symptoms do not change day to day.

A study on survival and mortality differences between dementia with Lewy bodies vs. Alzheimer’s disease conducted by James E Galvin found that the median survival time for people in the study with LBD was 78 years old. Survival after the onset of the disease was 7.3 years.

Regarding Alzheimer’s, the median survival time for patients in the study was 84.6 years, and the survival rate after diagnosis was 8.4 years.

Researchers suggest that the difference in disease progression can be attributed to a higher number of falls leading to injuries and consequent hospitalization in people with LBD.

On the other hand, while some type of sleep disturbance may occur in people with Alzheimer’s, REM sleep behavior disorder is not typically associated with it.

Visual hallucinations refer to people seeing things that aren’t there. These are common amongst people with LBD and typically occur earlier in the progression of the disease.

In Alzheimer’s, hallucinations do occur, but they are not as frequent or prevalent as in people with LBD. They also occur in the later stage of the disease as opposed to its onset.

People with LBD tend to have a face with the ‘flat affect’, where their faces show little to no emotion. The symptom is often present early in the disease. It often overlaps with Parkinson’s disease, a progressive nervous system disorder impacting movement.

In Alzheimer’s, facial expressions only deteriorate until the middle to later stages of the disease. They decrease with time.

If you think your or your loved one has symptoms similar to LBD or Alzheimers, visit NeuroX. NeuroX provides affordable psychiatric and neurology care at your doorstep and can provide you with the medical and emotional support you require. Head to NeuroX right now to get started and get online consultations from a board-certified neurologist of your choice within 24-48 hours.